Thank you to all who have supported my artistic development.  In your honor, I have created a coupon code good for 15% off any of my paintings currently on view at Broderick Gallery or in my Etsy shop.


Enter the code "FRIEND" at checkout or when speaking with George Broderick (george@broderickgallery.com) or www.quinsweetman.etsy.com through December 4. George has most of my new work. 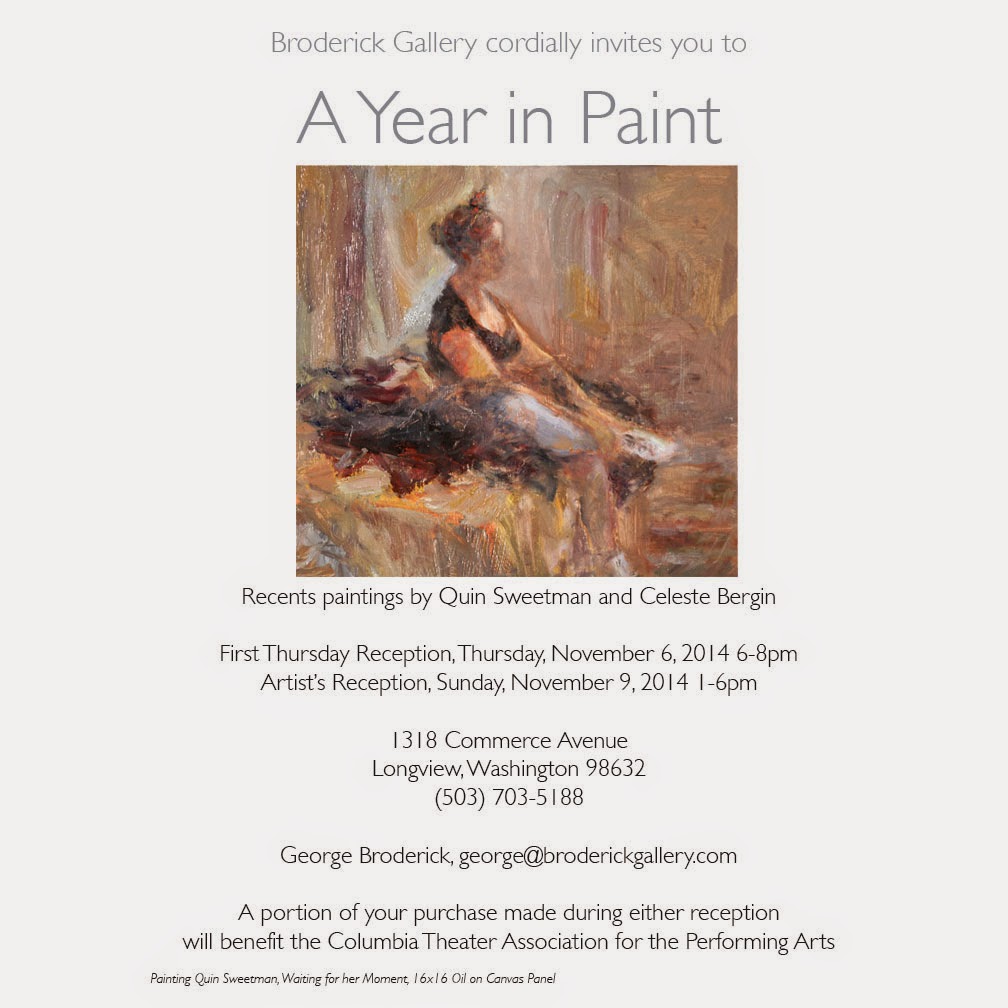 It's been quite a year! Here are a few of the nearly 50 paintings in our show this month at Broderick Gallery. Celeste Bergin and I have a two-woman show. I admire her work greatly. This will be fun and a wonderful opportunity to pick-up an original piece of art at a reasonable price.

Broderick Gallery announces that Quin Sweetman and Celeste Bergin will have a two-woman show entitled “A Year in Paint” opening at the Broderick Gallery on November 6, 2014.
Both Sweetman and Bergin are Pacific Northwest artists who work mostly from life and direct observation. “A Year in Paint” represents key paintings completed during the past twelve months.  Many of the selected paintings were completed “en plein air” (outdoors, in the manner of the French Impressionists, often in one sitting). Interiors, figures, still life and some studio work will also be included in “A Year in Paint”.

Sweetman and Bergin are acclaimed artists with a breadth of experiences and tributes between them. Quin Sweetman is a noted oil painter whose work has been shown in numerous exhibitions including CW Lofts Minneapolis, Walters Cultural Art Center and the People’s Art Gallery among others. Celeste Bergin’s recent professional achievements include Curator for the Pacific NW Plein Air Competition 2014 and invited artist in Portland Art Museum's Paris in the Park event. She has won many awards and shown work in over 100 exhibitions including the Columbia Art Gallery, the Pittock Mansion, Portland City Hall and numerous galleries.

The public is invited.

About Broderick Gallery:
The Broderick Gallery is geared toward an interdisciplinary interpretation of art and committed to a culturally inclusive viewpoint. Exhibitions focus on international, national and regional art developments chiefly in the 20th century and seek to present the cultural and historical context of art. Hours are Tues. thru Sat. from 10 to 5 and by appointment. For more about the gallery and its artists, please see http://broderickgallery.blogspot.com/ or www.broderickgallery.com or call George Broderick, 503-703-5188 "There's a Bird in My Heart" Acrylic on Panel, 8x8", Quin Sweetman 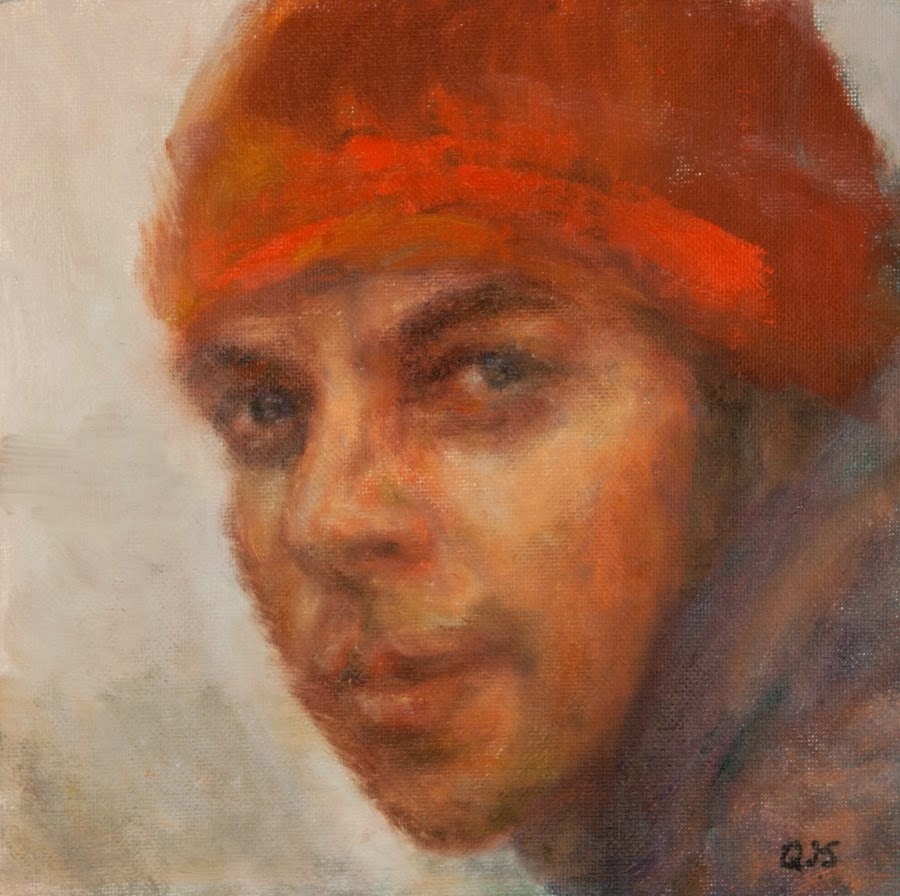 "I am white with knuckles and my future eyes are squinting and sand-crusted. I kiss you to make you stop talking" Oil on Canvas/Panel, 8x8", Quin Sweetman

These are paintings I completed during a rough time; my mother and my cat were both ill. The strange titles came from a group show I am in, in which painters were paired with writers. "Entitled" is the name of the show and we each randomly selected titles to paint about or paintings to write about, respectively.

The painting of my cat now serves as a eulogy as she just passed away. Her sweet, gentle spirit and skittish, bird-like ways inspired me to paint her for the title. The painting of my husband Andy, though a portrait of him, is also a a self-portrait of sorts. I found the title I had drawn from a hat to be silly at first but came to relate to it in this tender stage in life I am in currently.  On a lighter note, Andy wrote this tongue-in-cheek eulogy for our cat:

Kirby Puckett was born in the summer of 2001 near Lake Merwin Washington in the Mount Hood Forest.   She was destined to be a working animal for a band of Forest Gnomes who ride cats like humans ride horses. These weren’t your normal run of the mill forest gnomes who cause a bit of mischief like hiding your keys.  These gnomes are a truly nasty and evil race.   They find folks sleeping after a night of partying and poop in their mouth and give a whack to the head for good measure resulting in what most people think is a hangover.
One such morning when Quin and I awoke in a forest cabin, the gnomes had succeeded in causing a hangover but had left behind their small steed, who was now sleeping at the foot of our bed.  We figured that Kirby had escaped their nasty little clutches and wanted to be a normal cat like she had heard of in the legends of old.  This is where we started to share in the adventure of Kirby Puckett, the female cat.
Quin and I already had a cat named Keegan (RIP) and some of you may have read his life story some time ago.  We felt that Keegan and Kirby would be best friends.  We didn’t know at the time, but Kirby spoke a language and observed customs that were not aligned with any other living cat.  This might have had something to do with those shitty little gnomes.  It took the passing of Keegan and the adoption of Fuzz, AKA Joe Meower, AKA Johan Santana, AKA Black Kitty, etc. to understand this was a reality.
Soon after, we moved to the St. Johns neighborhood of North Portland and Kirby and Fuzz ruled the neighborhood for a couple of years.  Fuzz was the muscle and Kirby was the brains behind the operation. They sold catnip on the corner to make a few bucks and  bribed animal control to leave them alone.  All of that ended when a group of bootlegger cats by the last name Togo moved in next door. The Togo clan ruled with impunity, terrorized humanity and a claw to the eye and hole in the foot ended the outdoor rein of Kirby and Fuzz.  The message was loud and clear, the only safe place was indoors.
During these past few years of indoor life, Kirby would pass the time following Quin everywhere through the house.  Kirby would give advice and tips on painting.  Wonder why Quin wasn’t on the same sleep schedule as her.  She would think “why doesn’t Quin use the litter box too" and wonder why our food was always eaten in front of the magic box where noise and light came from.  Whenever Quin would ask Kirby what she should paint next, the answer was always: Birds, Birds, Birds.  By this time Quin had become semi fluent in Kirby’s language and was always trying to teach it to me.  Kirby had a love hate relationship with petting, me, Fuzz, litter boxes, and the device she called the VACUME.  She was amazed that it could scream and eat at the same time yet terrified at how it moved and in our house, only came out before other people came over.
After a brief sickness, Kirby is now hanging out with Keegan somewhere in heaven.
I read somewhere that cats look at humans as bigger cats who feed them.  Kirby leaves behind two big cats and her brother fuzz.

My time at the coast was productive. The annual Sandgren Coastal Paintout happens for two weeks every July in the Newport, Oregon region and includes many beautiful state parks and scenic areas. 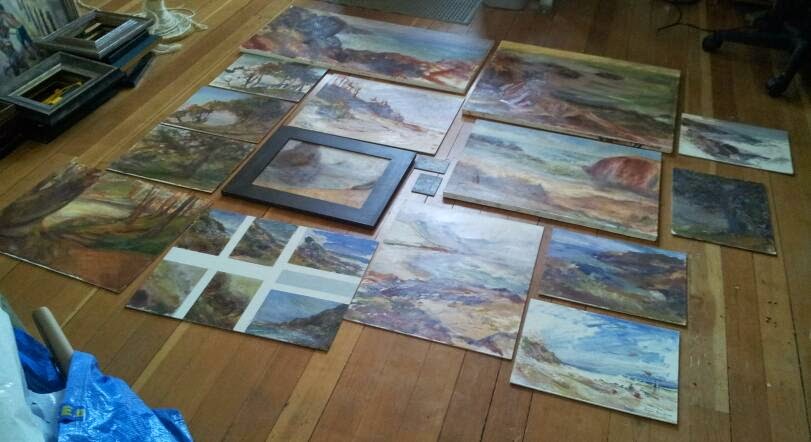 My 21 works, range in size from 36" wide to only 3". Some were quick "sketches": others more finished. I look forward to finishing and showing this body of paintings.

In Alla Prima Portland: Show of Painterly Paintings from Across Region 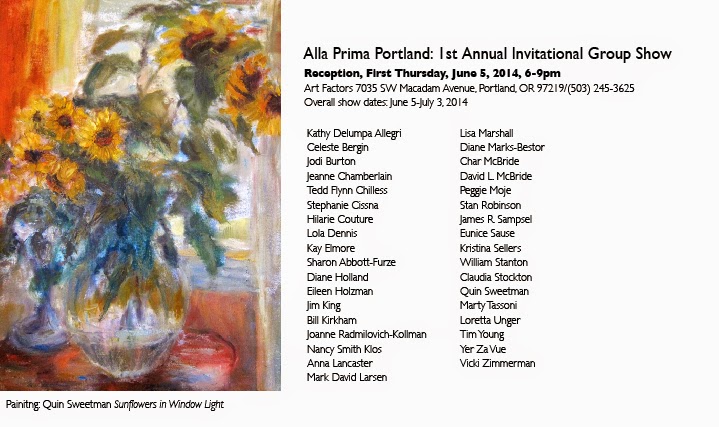 Alla Prima Portland has teamed up with Art Factors to present a show that offers Alla Prima paintings* from all over our region within the last year. Thirty-five artists were invited to show in the first Annual Alla Prima Portland Invitational Group Show 2014 and I'm thrilled to have been included.

You are cordially invited to join us on First Thursday:

*(Alla Prima translates from Italian to "at once".
An Alla Prima painting is usually started and finished in one painting session, but the term is also more loosely applied to any painting done in a direct, expressive style, with minimal preparation).

The beautiful irises in my yard are all in bloom and my friend's daughter stopped by to spend the afternoon so of course we painted. Fun Day! When she left, I used her leftover acrylics to have some fun with two little panels and my yellow irises.  I think I like them better than the one I made of the purple one as they appear more loose and fresh. What do you think? 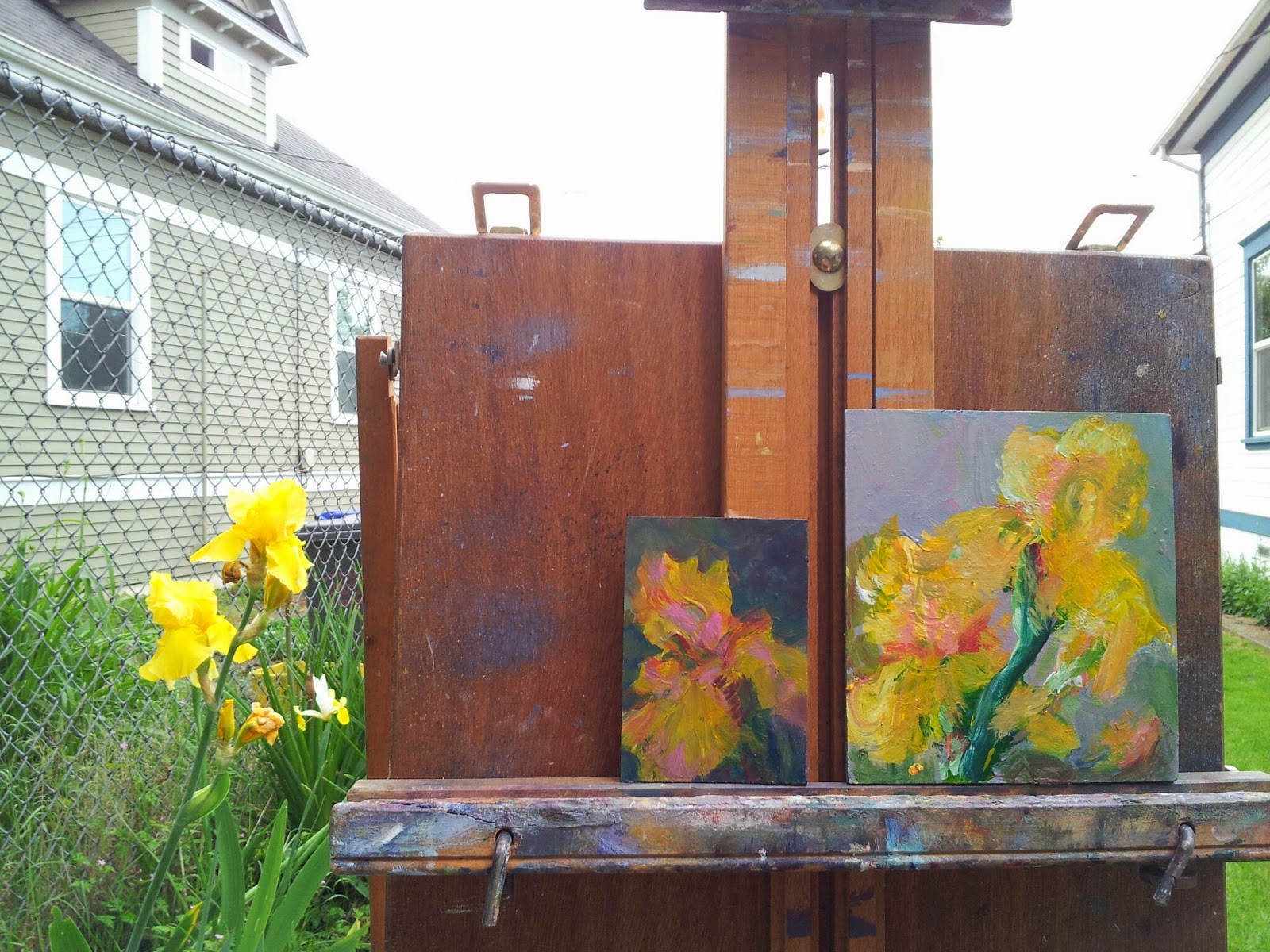 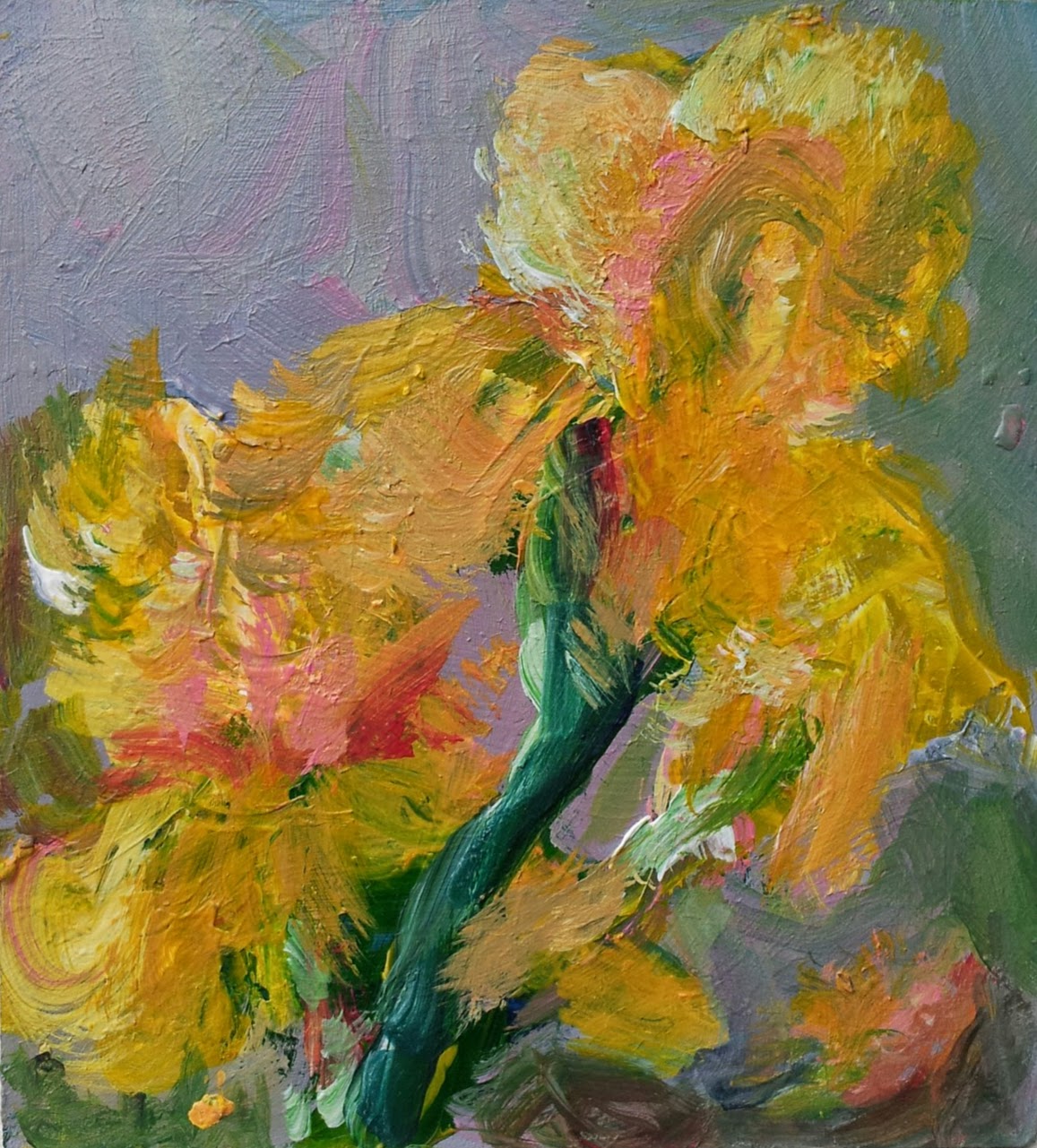 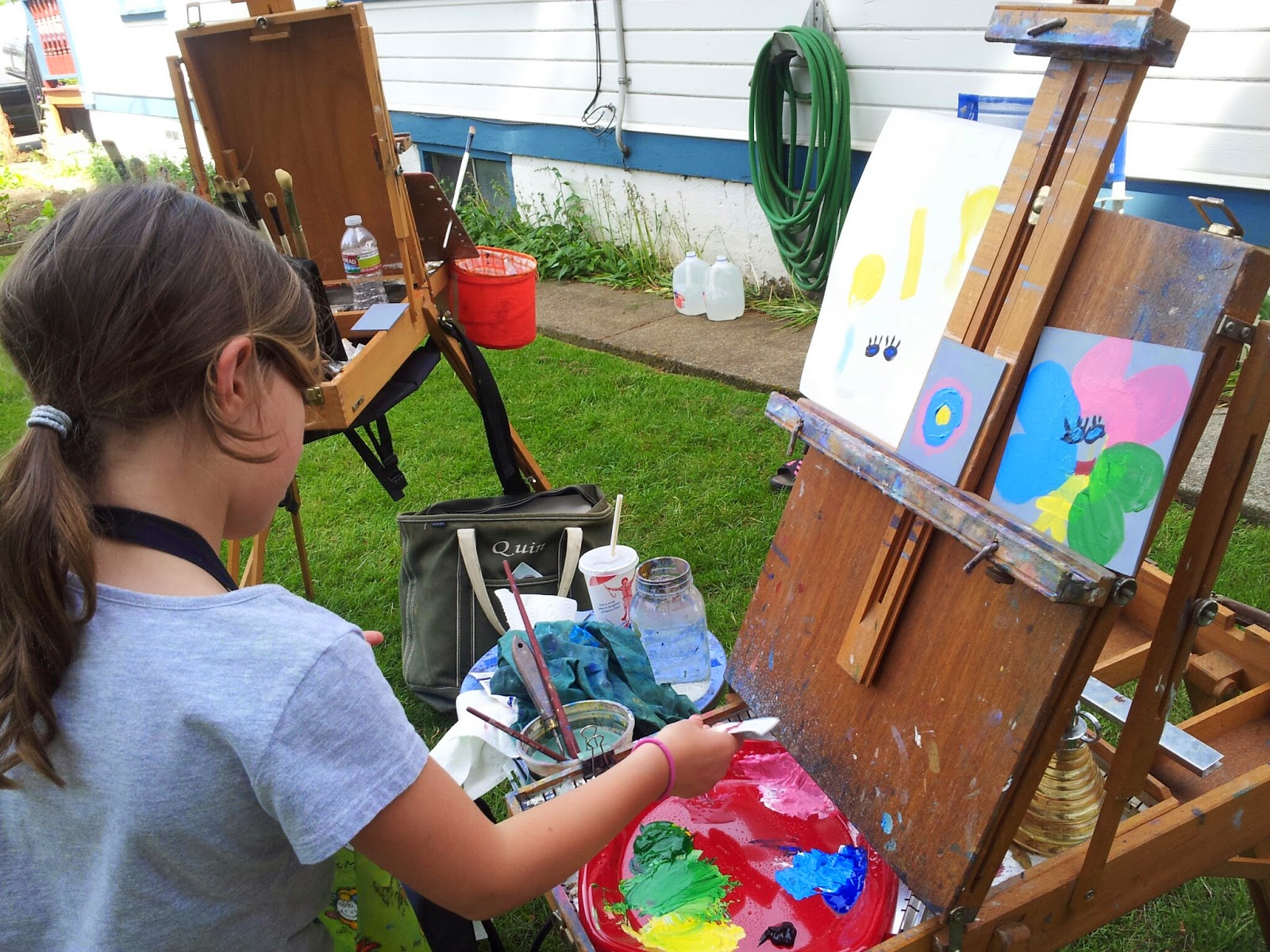 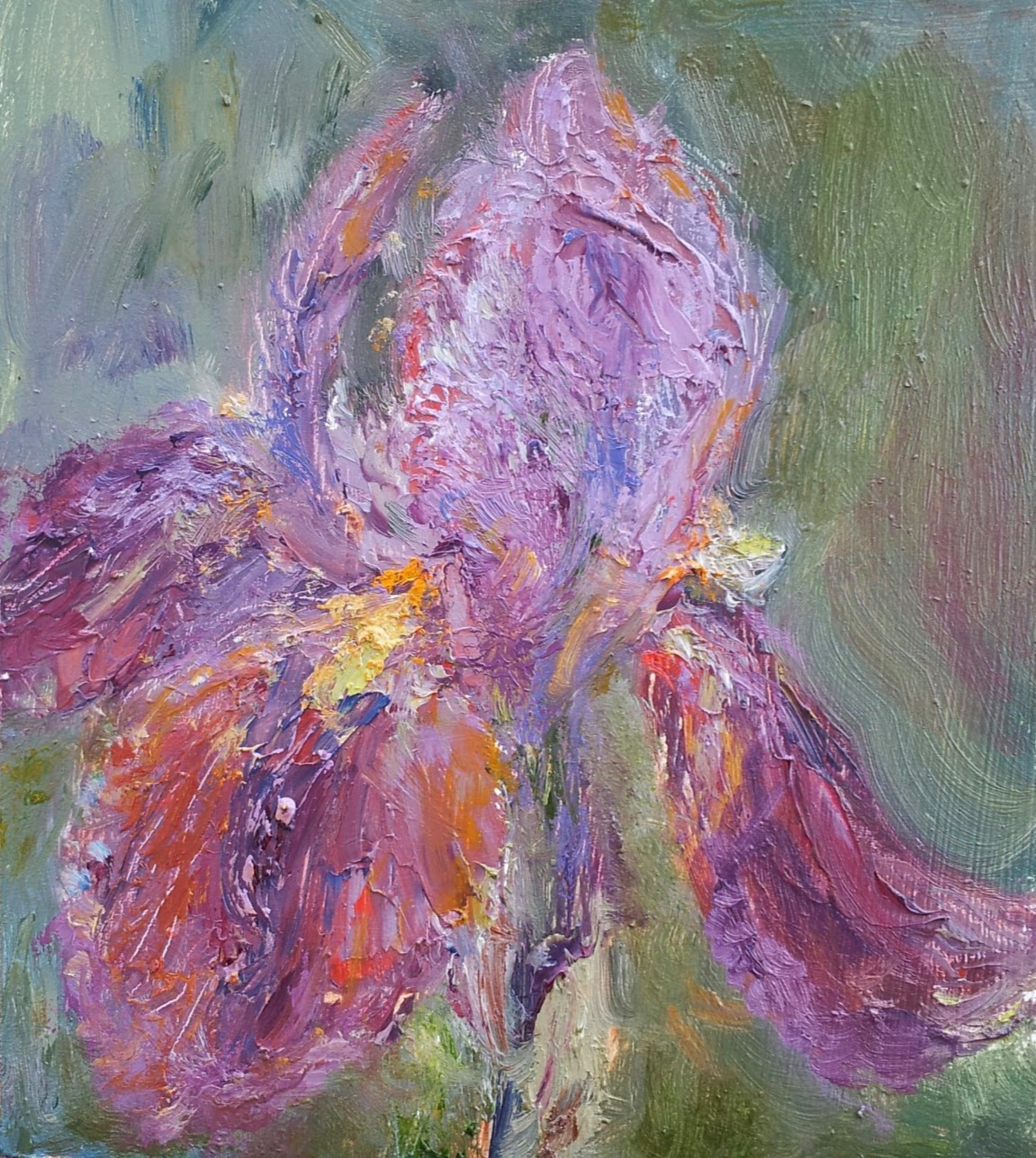 My little oil of my other, purple/burgandy iris

What a day! I am blessed to live in such a beautiful neighborhood and have a group of painters who like to get out and paint "plein air" (Frenchy term for painting outside, like the Impressionists).


This is a larger painting for plein air but I'm going to paint larger more often as it is more freeing for gestural brushwork and compositions. Go big or go home!
Posted by Arty Quin at 10:52 AM No comments:

I Did a Big, Scary Thing

I applied to be represented in an important regional institution. It took me all day to get all the photos, bio, CV, etc., together in a professional manner and I made myself sick to my stomach for a bit. Must mean it matters a lot to me. Now it is done and I'm ready to enter the next big thing with less fear; I hope.

In celebration of this feat, I give you "Dahlias in Mexican Vase."

Fun Show to Sell All work for $50, framed: "88 Strong":  Eighty-eight artists were each given eight 8x8" panels and 88 themes from which to choose. Sale of 500+ works starts Thursday at Goodfoot Lounge & Pub, 2845 SE Stark Street, at 5 p.m. I had fun experimenting with these pieces. See all themes at http://thegoodfoot.com/gallery/

Promote Your Page Too